Annotations on Taijiquan by Wu Mengxia

These are two of the Songs of Eighteen Necessities from Wu Mengxia's taiji book. These eighteen songs are followed by annotations from Wu himself. The order of the songs are as follows:

Peng-Ward Off
Lu- Roll Back
Ji- Press
An- Push
Cai- Pluck
Lie- Split
Zou- Elbow
Kao- Bumping
Jin- Advancing
Tui- Retreating
Gu- Attend
Pan- Observe
Ding- Stability
Zhong- Centrality
Shuang- Double
Dan-Single
Xu- Empty
Shi- Full
The first song is to attend to the three fronts. The three fronts are the forward eye, forward hand and forward foot. These three points are to be taken notice of so that your power is always centralized. If the opponent takes one of these points off the centerline an opening is made. However, looking at the opponent we can use the song in an opposite way. By knowing that keeping these three points is safe for ourselves, also we want to take advantage of any weakness the opponent may show by not keeping his three fronts.

The second song is to be aware or observe of the opponents seven stars. The seven stars are the ankle, knee, hip, wrist, elbow, shoulder, and head. These are all areas that the opponent can use to attack us. On the other hand, these are places on our body that we can use to strike the opponent. Each of the seven stars should be capable of attacking and defending.  So we can look at these songs from a yin/yang paradox and extract much more information.

In our school we put these ideas into our martial skill set by including one idea that integrates these two songs in a seamless way. We use another very famous internal martial arts poem, Han Xiong Ba Bei Chen Jian Zui Zou, which means seal the chest, pull up the back, sink the shoulders, and drop the elbows. By conforming our body to this mold we find that defense of the three fronts, and awareness of the seven stars is created naturally by this posture.

Some modern  internal arts practitioners have mistaken parts of this song. This song is meant to describe the posture of san ti shi or the starting position for fighting(similar to a boxers starting position). However, during martial arts practice and qigong the chest is not meant to always be sealed. In Internal arts in general there should be an opening of the sternum as well as an opening of the thoracic spine. These two openings oscillate between an open and closed posture much in the same way as the lumbar spine does. If the lumbar and cervicals open and close, then the thoracic spine naturally cannot stay in a static state.

This translation shows many of the ideas that we practice in internal arts but are not often talked about. These are many chapters in this book with many songs in each one. Dr. Brinkman did a great job translating this text which helped understanding it in Chinese. For practitioners of Yi Zong internal arts or Taiji, Xingyi, and Bagua in general, this is an outstanding resource.
Posted by Matt at 15:12 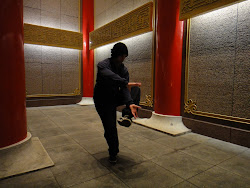